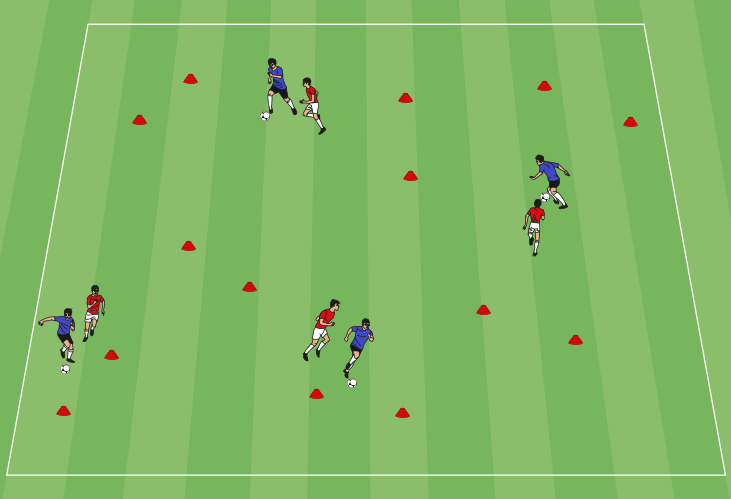 Scoring spree is a great 1v1 drill to keep lots of players active at once. Compared to other 1v1 variations, this drill is exceptional for large teams because players don’t have to wait in lines and they are constantly engaged.

On a large field, set up cone gates (sets of two cones that players can dribble through) and place them randomly throughout. Have players partner up. Each pair of players needs a soccer ball for this drill.

Players play 1v1 for one minute while attempting to dribble through as many cone gates as possible. When the round is over, the parter who dribbled through more cone gates wins. To make the game as fair as possible, I usually have players play rock, paper, scissors to see who gets to start with ball.

Having possession of the ball is a huge advantage in this game because when one player has the ball, the other player can’t score. With this in mind, players with the ball may benefit from shielding it from their opponent. This should be done while simultaneously trying to score goals. A good rule of thumb is that players should always keep their bodies between the ball and the defender.

In addition, I recommend that players keep their heads up while dribbling. This helps them not only see where their opponent is, but also where other players are on the field are. With large teams this is very important so that players can avoid collisions. When lots of players are doing this drill at once, it is best to use a large grid so that the space isn’t too crowded.

There is another variation of scoring spree where instead of competing 1v1, every player has a soccer ball and all of the players race to see who can dribble through the most cone gates in a minute. For more 1v1 drills, take a look at these: