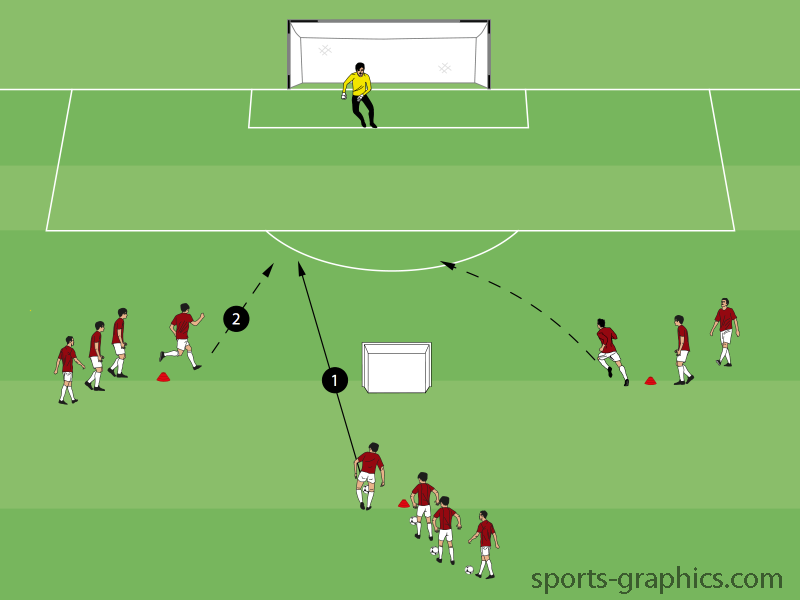 2v1 pick a side is a simple finishing drill that gives players an opportunity to work on delivering quality through passes and tucking away their chances in front of goal.

Create three lines of players 35-40 yards away from a large goal in a triangle arrangement as pictured above. Between the two lines closest to the large goal, place a mini goal for defenders to counter attack on. All players in the line furthest from the large goal need soccer balls.

The first player in the line furthest from the large goal must choose to play a through pass to one of the two sides. The side they decide to pass to becomes the attacking side, while the player they didn’t pass to becomes the defender. Once the pass is made, the passing player can support the attacker creating a 2v1 situation.

This drill is designed primarily for the attackers to work on finishing so it is relatively rare that the defenders can launch successful counter attacks. However, the last session I used this drill I made things a bit more interesting by telling my players that if a defender managed to win the ball and score on the mini goal, both attackers would have to do 20 push-ups. This gave the defenders a challenging incentive and provided a fun and competitive environment for the team.

One of the keys to this drill is that the passer provides a quality through pass to the side of their choice. When the through pass is played properly and weighted correctly, it typically gives the attacker an excellent goal scoring chance without too much pressure from the defender who is chasing.

The great thing about 2v1 drills is that they provide an excellent opportunity for players to work on finishing while under a small degree of pressure. Typically with 2v1 drills, attacking players can get quality shots off due to their numerical advantage. For this reason, 2v1s are great for developing goal scoring abilities.

One 2v1 drill that is very similar to 2v1 pick a side is the Dortmund 2v1 shooting drill which is played with two large goals instead of one. In addition, be sure to check out these other 2v1 drills for players to work on finishing: