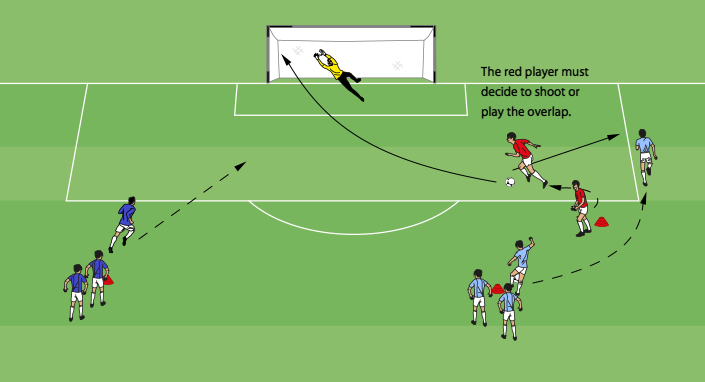 Arjen Robben is a famous dutch winger who is known for flying down the right side of the field, cutting in, and curling shots around the keeper with his left foot. His speed and dribbling ability have made him a star for his club Bayern Munich and his country. In the Arjen Robben finishing drill, players cut inside from the wing and shoot on goal just like Robben does.

Set up three lines just outside the top of the 18 yard box. The soccer balls start in the middle. One side are the runners who try to finish crosses, the other side play the role of Arjen Robben.

The first player in line plays a pass to the Arjen Robben side and performs an overlap. The player emulating Arjen Robben can either cut inside and have a shot, or play a pass to the overlapping player who can then cross the ball. After each repetition players rotate to the line to their right.

After everyone has gone through each role several times, switch sides so that players work with both feet. This drill can also include a defender pressurizing the ball carrier or defending the cross.

Some other great finishing drills include:

To help your players beat their man like Arjen Robben, check out these 1v1 drills: