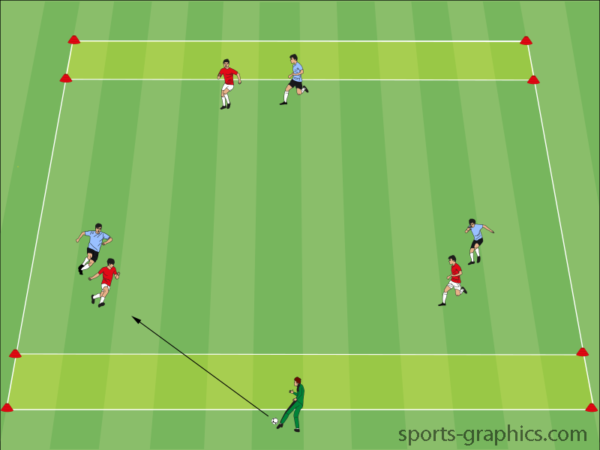 Close the space is a drill primarily designed to improve defensive pressure in midfield. However, it can also be used with more of an offensive emphasis to help players work on getting away from their defender and finding space.

Create a large rectangular grid with an ‘endzone’ on either side as pictured. Divide players into two teams of three or four. When performing this drill with more than eight players, it may be best to have players go in waves or create multiple grids.

The two teams begin inside the grid with one team starting out on offense and one starting on defense. The offensive team moves around the grid trying to separate themselves from the defenders and receive a pass from the coach.

Once the coach plays a pass, the offensive team can earn a point by keeping possession of the ball for five seconds. The defense earns a point if they can win the ball within five seconds.

Whichever team has the ball after five seconds can earn an additional point by dribbling into one of the two end zones.

This game creates a battle for space between the offense and defense which is similar to what goes on in midfield during a match. The defense’s objective is to close the space as quickly as possible to suffocate the offense and win the ball back. The offensive players on the other hand must work hard to free themselves from their markers.

Close the space can be used with an offensive or defensive emphasis depending on the particular session and goals of the coach.

Another drill with a defensive emphasis similar to close the space is swarm the ball carrier.

To check out an entire collection of our 100 favorite soccer drills, click here.