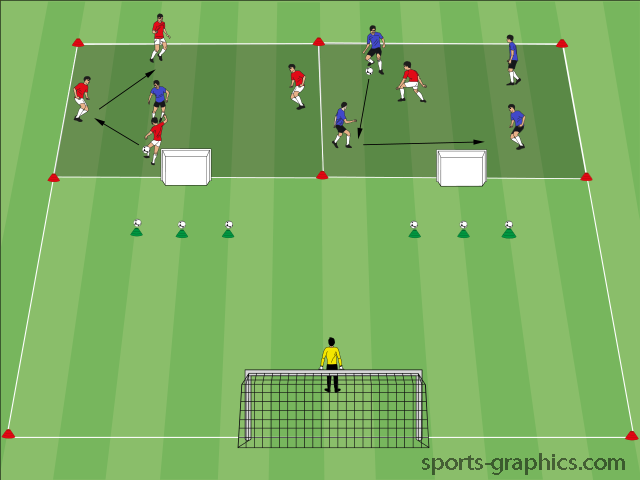 Rondo to finish is an excellent way to combine passing and finishing practice all in one drill. The game starts with a simple rondo keep away drill and progresses to taking shots on goal if the teams in possession can successfully complete passes.

First, create a large square grid with a full-sized goal on one end. Opposite the large goal, create two smaller grids where the rondos will take place. Set up mini goals at the ends of each rondo grid as shown in the diagram. Also place three soccer balls behind each mini goal as shown. In addition, players will need soccer balls for the rondo portion of the drill.

Divide players into two even teams. This drill works best with teams of four to seven players. Each team starts in a rondo grid and assigns one player to defend in the other rondo grid.

On the coaches signal, the players begin playing keep away from the opposing defender. Once a team completes a minimum number of passes (I usually like to use six passes as the requirement), they can score on the mini goal. When a team scores on their mini goal, the player who scored advances outside of the grid and tries to finish one of the three soccer balls on the large goal. Once a team has shot all three of their soccer balls, the game is over and the team that scored the most goals wins.

In many ways this drill is like a race because both teams have to move the ball quickly and generate more scoring chances to win. Whenever players are performing keep away drills, I always encourage them to think one step ahead to increase the speed of play.

Each round swap out the defenders in the middle. This helps prevent fatigue and ensures that adequate pressure is always applied. More skillful teams may use two or three defenders in each rondo grid to make the game more challenging.

If you like rondo do finish, be sure to check out these similar drills:

5 thoughts on “Rondo To Finish”