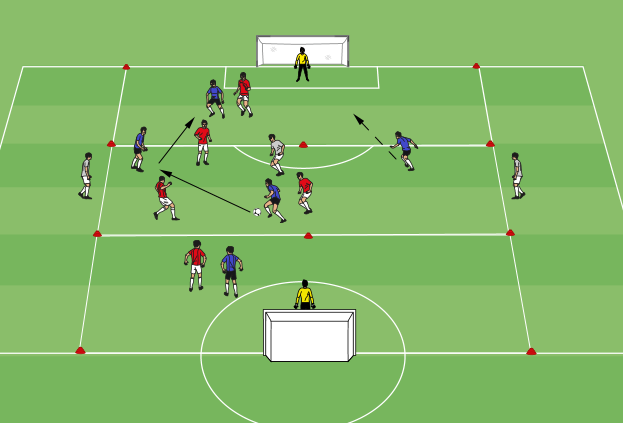 This game mimics a regular soccer game by having teams compete for possession in the middle of the field and then once establishing control, moving the ball forward to score.

Set up a rectangular grid with three zones and a goal on either end. Create two teams and have one player from each team start in each of the outside zones. Coaches can use neutral players in the middle to help teams on offense.

The soccer ball starts in the grid in the middle with teams playing keep away. Once a team connects six passes in a row they can play a pass to their attacking teammate on the outside who can try to score on goal. Once a team passes outside, they are also allowed to bring one additional player into the outside zone to create a 2v1 situation.

If playing with neutral players, teams will have a numerical advantage on offense in the middle. Emphasize speed of play and finding ways to attack quickly once players meet the six pass requirement.

1 thought on “Possession To Finish With Two Goals”