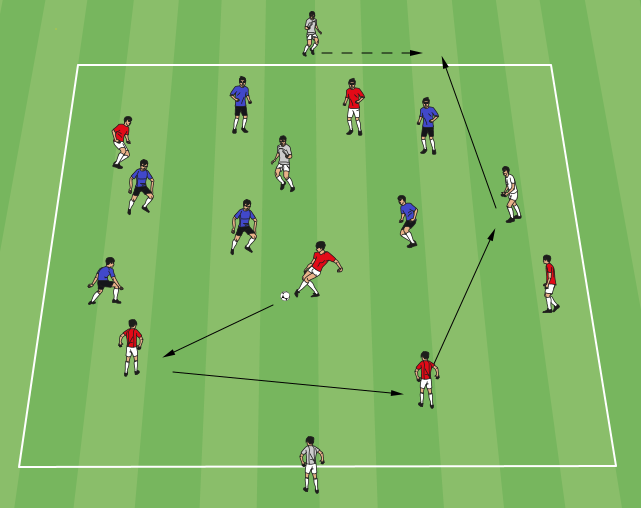 Possession to target players is a great possession game for teams to work on moving the ball and breaking down a defense. In this game teams try to pass to a target player after completing a certain number of passes.

Set up a field. Create two teams to play against each other and assign a neutral target player to each end. A coach may also have one or two neutral players play all time offense in the middle.

The teams in the middle go head to head trying to keep possession of the ball. Once a team completes six passes in a row, they can pass it to a target player for a point. When a team scores a point in one direction they must attack in the other direction because they may not score points playing to the same target player twice in a row.

The first team to score three points wins. If a team scores a point they don’t have to stop, they can continue passing starting back at zero. In addition, teams can play passes to either target player before they get six passes but it won’t count as a point unless they get six passes first.

Shuffle teams after each round including neutral players. Target players may move up and down the end line to help find angles for which ever team has the ball. Make sure players use the entire field and avoid bunching up. Switching the play can be very effective in this game.

If you like possession to target players, this site has tons of great possession drills that are similar to this one. A few of my favorites include:

1 thought on “Possession To Target Players”