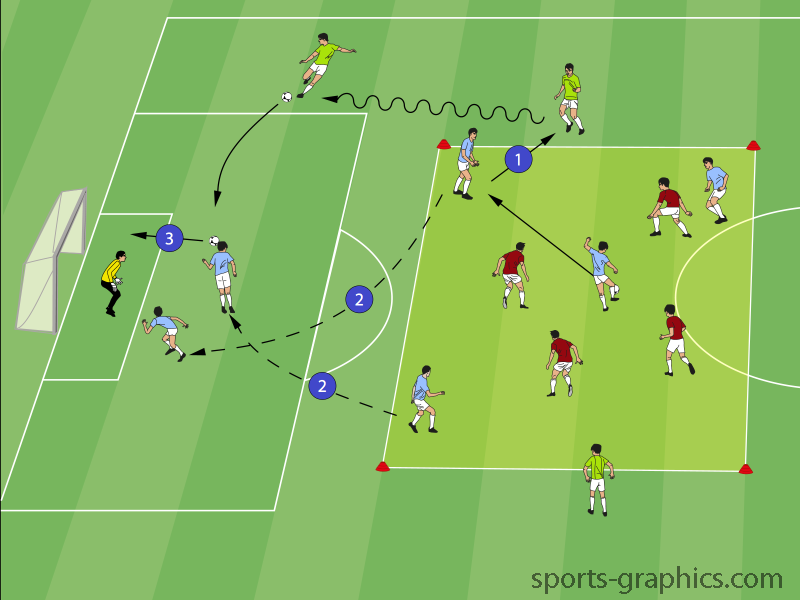 Possession to wide players is a great drill for players to work on keeping the ball under pressure, distributing to wingers, and finishing crosses.

First, set up a rectangular grid around 25 yards away from a large goal as pictured in the diagram. Then divide players into two even teams. Team sizes may vary, however, teams of three to six players each work best for this game. In addition, this game requires a goal keeper and two wingers who play all time offense.

The game starts with the two teams playing keep away from one another in the rectangular grid. The wing players position themselves on the outsides of the grid and can be used as passing options for both teams.

Once a team completes six consecutive passes in a row, they can play a pass out to one of the wingers who then dribbles down line for a cross. The team that played the winger sends two players into the box to attack the cross. The defending team may send one player into the box to defend. Teams earn a point each time they successfully finish a cross.

This drill combines many aspects of play such as keeping possession of the ball, playing quickly, crossing, and finishing. It’s important that players time their runs when going into the box to put themselves into a position to finish.

Pro Tip: Keep a supply of soccer balls close to the rectangular grid so that players can restart the play easily after each cross. This makes transitions quicker and minimizes down time.

For more drills to help players keep possession of the ball and play quickly, check these out:

For practice with crossing and finishing, take a look at these:

3 thoughts on “Possession To Wide Players”