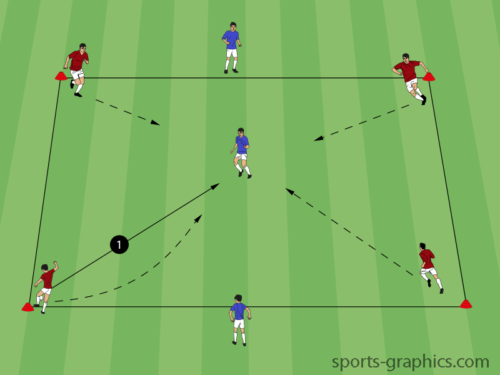 Swarm the ball carrier is an excellent drill to help players work on aggressively pressing an attacker to try to win the ball back. This drill was inspired by Barcelona’s six second rule. When Barcelona lose the ball, the nearest two or three players apply immediate pressure for six seconds because this is when the opposition is most vulnerable to lose it. If the team can’t win it back in six seconds, they drop into an organized defensive structure.

First, create a 15×15 yard square grid. Have defensive players start in the four corners. In addition, have one attacking player start in the middle of the grid with two teammates on end lines to try to pass to.

This drill teaches players to be aggressive on defense and strategically close off passing lanes to isolate the attacker. Emphasize that players hunt the ball together and communicate to take away the attackers options.

Another variation of this game can be played by awarding the offensive player a point if they can retain possession of the ball for at least six seconds.

This drill emphasizes defensive pressing as soon as the ball is lost. In order to help your team retain possession of the ball in the first place, be sure to check out some of our top possession drills: