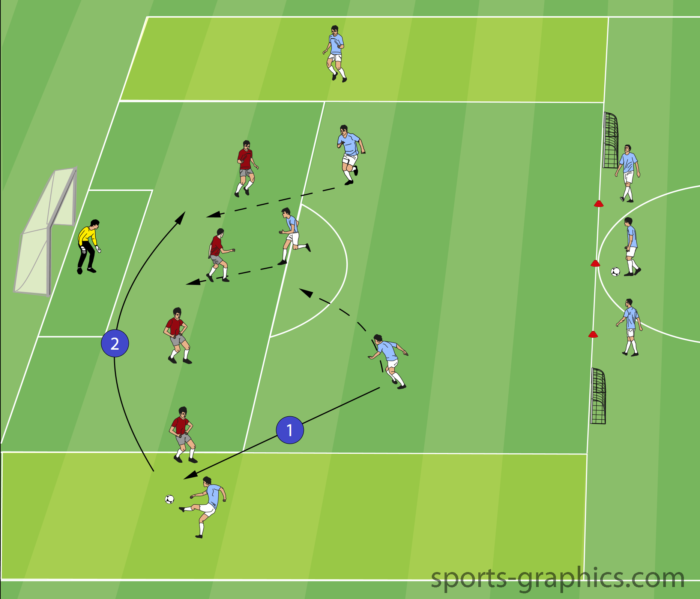 Wide attack in waves is a simple drill to get wingers involved on offense and practice creating goal scoring chances from the wide areas.

Create a grid with a large goal on one end and two mini goals on the opposite end. In addition, create wide areas for wing players on the sides of the grid.

This game is played with two teams. The attacking team starts with two players in the wide areas and three players in the middle of the field who attack in waves. The defending team defends the large goal with four players.

The first wave of attackers start with the soccer ball and attempt to score on the large goal. However, before the attackers can score, the ball must be played into a wide area to one of the wingers. The defending team can’t defend in the wide area until the ball has been played to a winger. Once the winger touches the ball they can either play a cross into the box or a simple pass back in to the middle to retain possession.

In the event that the defense wins the ball, they can counter and try to score on the two mini goals. When the ball goes out of play, the three attackers in the middle are off and the next wave of attackers start.

In addition, this is a great drill for players to work on crossing and finishing. Be sure that players are timing their runs into the box and attacking crosses aggressively to create quality chances.

If you like wide attack in waves, be sure to check out these similar drills to improve play in the wide areas:

1 thought on “Wide Attack In Waves”