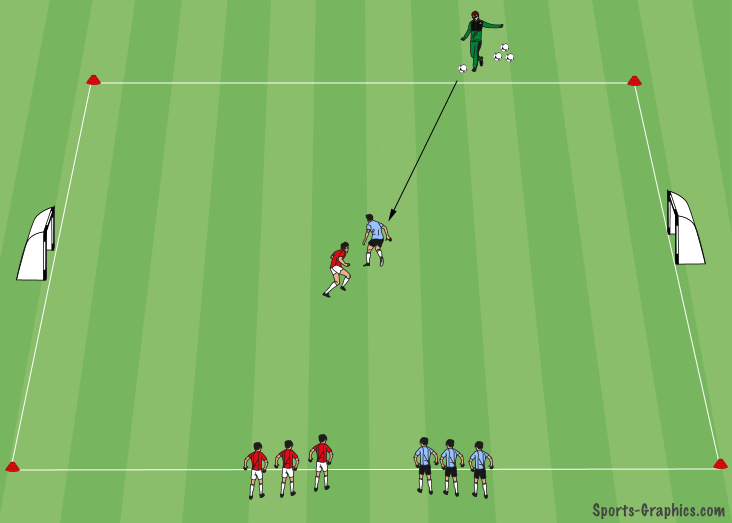 1v1 attack in either direction is a simple 1v1 variation where attackers can score at either end of the playing field.

Create a rectangular grid with a mini goal on either end. Divide players into two teams and have the first player from each team come out to the middle of the field.

Once the two players in the middle are ready, play a 50-50 ball onto the field. When putting the ball in play, it is usually best if both players have a relatively even chance of winning the ball. This stimulates competition and helps develop ball winners. Whichever player gains possession of the ball can attack in either direction to try and score a goal. If the defending player wins the ball, they can also attack in either direction.

This drill is a great opportunity for attackers to work on deceptiveness. For instance, an attacker may want to fake as if they are going to attack in one direction and then quickly turn and go the opposite way. With this in mind, the Cruyff turn can be an excellent move in situations like these.

Since players can score on either goal, the attacking player has a huge advantage in this game. For this reason, the real key to success is for players to win the first 50-50 ball.

For drills that are similar to 1v1 attack in either direction, take a look at these: