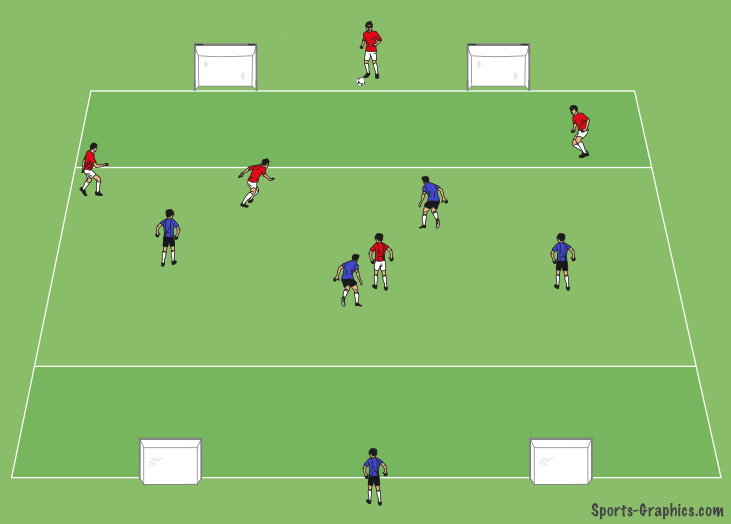 4v4 with holding players is a simple small sided game where each team is given an additional player to pass back to on their own end line.

Create a field with two mini goals on each side. I prefer to use Bazooka goals because they are sturdy and don’t get knocked over very easily. In addition, create two teams of five players and have each team designate a player as a holding player who stays behind the end line. This game can also be played with varying sizes of teams. Keep in mind that if you play this game with large teams, it would be a good idea to increase the size of the field so that players have an adequate amount of space.

The teams play four against four trying to score on the opposing team’s two goals. This game can be modified in various ways depending on what a coach would like their team to work on. Often times I will use a minimum pass requirement to help my players work on keeping possession of the ball.

When playing four against four, it is important that teams have length, width, and depth on offense. This helps the attacking team stretch out the defense and open up passing lanes. With this in mind, a diamond formation with one defender, two wingers, and a long target forward is a great option for 4v4. In addition, the holding player provides depth and an extra passing option to help their team when they have possession.

Another small sided game where the team with the ball has a slight numerical advantage is 3v2: last person to touch comes off. Also, be sure to take a look at these possession drills to help your team work on passing and keeping the ball: