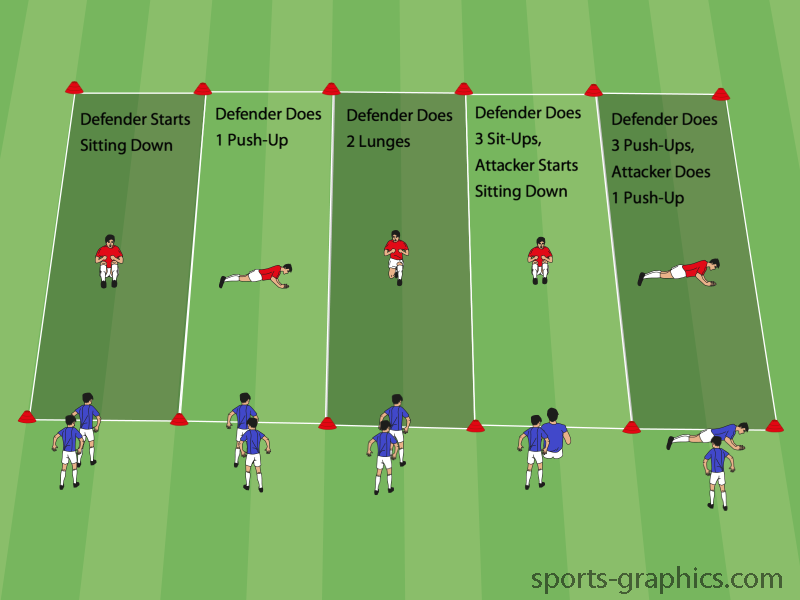 1v1 tag variations are a fun and competitive way to get players warmed up for practice. Players typically enjoy tag games and I’ve found that these are good to use following a general dynamic warm-up.

Create lines with 3-5 players in each one, spaced out every 5 yards. Players don’t need soccer balls for this drill, however, they could be incorporated afterwards by transitioning into 1v1s.

In order to make the drill more challenging for the tagger, there are many different variations and starting points for this the players in this game. Here are a few of the best ones I have used that are pictured in the diagram (the tagger is identified as the defender in the image and the runner is identified at the attacker):

These variations give the runner a slight head start to try to get past the tagger while the tagger must be quick to get up and tag the runner.

As a coach you can get creative and come up with your own variations for this drill. If you discover any fun variations, feel free to leave them in the comments section below.

Another way to change the difficulty for the taggers and runners is to adjust the distance away from the line that the tagger starts. The further away the tagger starts, the easier it is for them because they have more time complete the exercise and get up to tag the runner.

Here are some of my other favorite tag games that players enjoy: