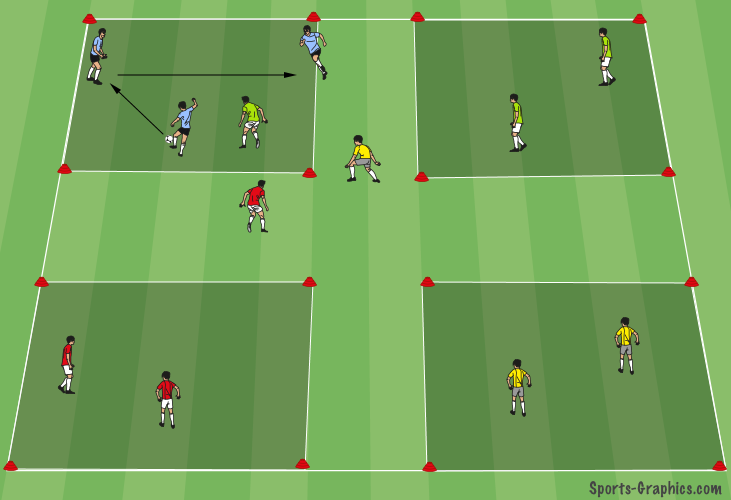 The four team possession drill is an excellent way for players to practice keeping possession of the ball in tight spaces. In addition, it’s a very fun and competitive game to play with four teams.

This game is played within the confines of a large square grid. In each corner of the grid, a smaller square is created where the four teams start, as shown in the diagram. This game works best with teams of three or four players each. Each team nominates one player to start as a defender who starts in the middle, outside of their team’s small square.

To start the game, the coach plays a ball to one of the teams in a corner. The team with the ball can earn a point by completing four consecutive passes and then playing a pass to a team in a different square. The designated defender from the team who is in possession of the ball may enter their team’s square to help on offense.

The defenders from the other three teams try to disrupt the team in possession. One defender may enter the square with the ball to apply pressure to the offensive players. The other two defenders must stay in the middle and try to cut off the passing lanes to the other groups.

Because there are only two defenders in the middle to cut off passing lanes, the team in possession should be able to easily find an open group to pass to once they’ve met their minimum pass requirement. Encourage players to communicate, especially when they have the ball.

A few drills that are similar to the four team possession drill include: