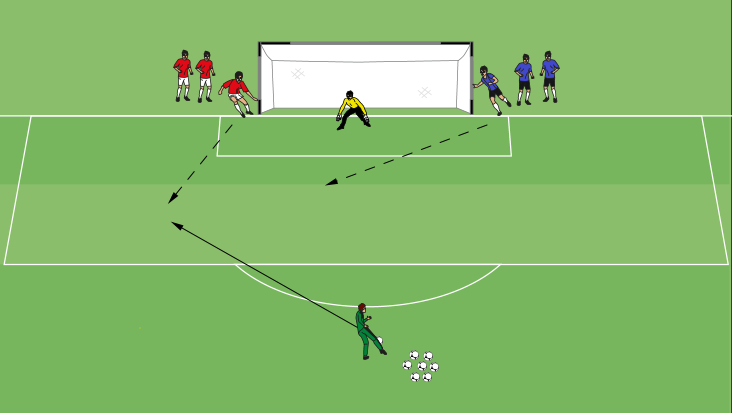 In 1v1 starting at the posts, the coach starts with the soccer balls and players start with their hands touching the posts. The defender can’t move until the attacker checks for the ball.

Have players form lines at the posts. The coach starts with soccer balls at the top of the D.

One line is designated as the attacking line while the other line is designated as the defending line. Both players start with one hand on the post. The attacker can leave at any moment to check for a pass from the coach. The defender can’t enter the field until the attacker’s hand leaves the post. The attacker checks for the ball and tries to score while the defender closes down the space. If the defender wins the ball they can earn a point by dribbling across the top of the 18 yard box with the ball.

Checking players should call for the ball and communicate where they want the pass to be played. The defender should try to close the space quickly so that the attacker can’t get a shot off.

Similar drills to 1v1 starting at the posts include 1v1 back to pressure and battle for the ball.