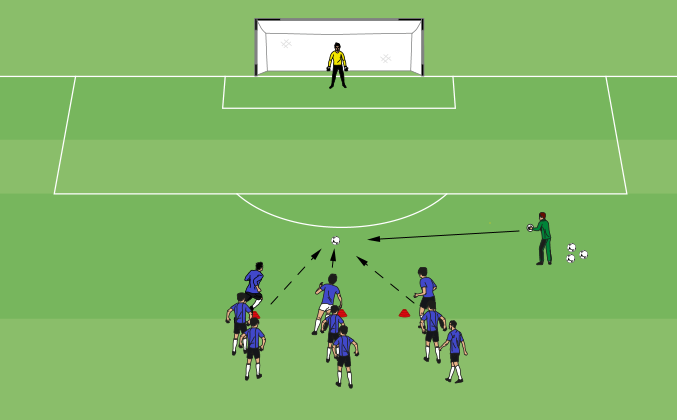 1v1v1 is a game that is every player for them self with three players trying to score on one goal.

Set up three cones 25-30 yards away from a large goal to function as lines for the players. This game requires a goal keeper to defend the large goal.

When the first player from each line is ready, the coach tosses a ball out onto the field. The three players go at it 1v1v1 with all three of them trying to score on the large goal. The coach can have players in line start standing up, or for different variations can have players start in different positions. These could include players sitting down with legs straight out in front and hands on their head, plank position, lying on their backs with arms and legs straight in the air, performing a push-up before starting, etc.

Emphasize hustle and getting shots off quickly. This game is difficult for attackers who wait because when one player has the ball there are two players defending them.

1v1v1 is a variation of battle for the ball with three players instead of two. Some other 1v1 drills where players have to fight for the ball include 50-50, call a number, and sprint for the advantage.