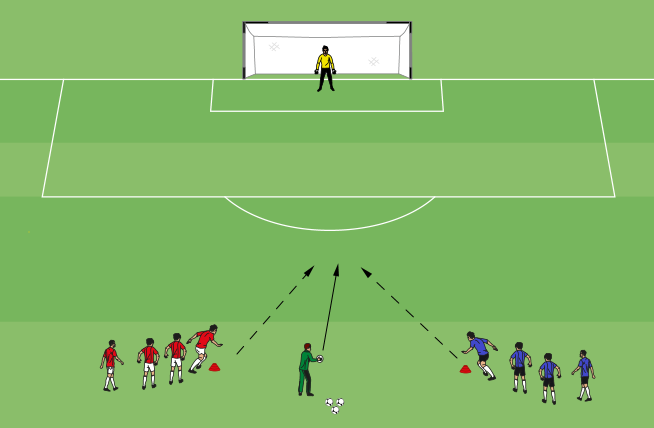 Toss out a 50-50 ball and let players battle for the ball in this competitive 1v1 drill.

Have players form two lines about 25-30 yards away from a large goal. The coach stands between the two lines with a supply of soccer balls.

When the first players from each line are ready, the coach tosses a ball out onto the field. The two players play 1v1 with both of them trying to score on the large goal. The coach can have players in line start standing up or for different variations can have players start in different positions. These could include players sitting down with legs straight out in front and hands on their head, plank position, lying on their backs with arms and legs straight in the air, etc.

This game is 1v1 at it’s finest as players jostle for the 50-50 ball. Let the players battle it out and find ways to beat their opponent. Encourage players to hustle, work hard, and never give up on a play.

If you like 1v1 battle for the ball, check out these other great 1v1 drills: