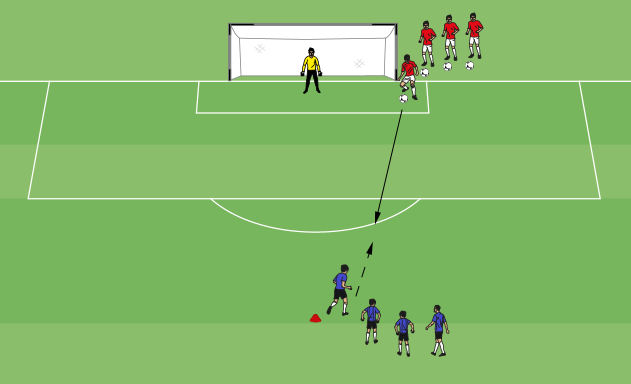 This is a common variation of 1v1 going to goal to develop excellent attackers and defenders.

Split the players in half in order to create a line of defenders at a post and a line of attackers at the top of the D. Players who start in the defending line need soccer balls.

The soccer balls start with the defenders who pass the ball out to attackers. The attackers take the defenders on 1v1 and try to score on the large goal. If the defender steals the ball, the round is over. Players switch sides after every dual.

Optional: Coaches can set up mini goals across from the large goal so that if a defender wins the ball, they can try to score on the mini goals.

Make sure defenders approach the attackers with a sideways on stance in order to force them one way. It can be helpful for defenders to force attackers to use their weak foot. If a defender is unsure of an attackers dominant foot, it is reasonable to assume that their left side is weaker because the majority of players are right footed.