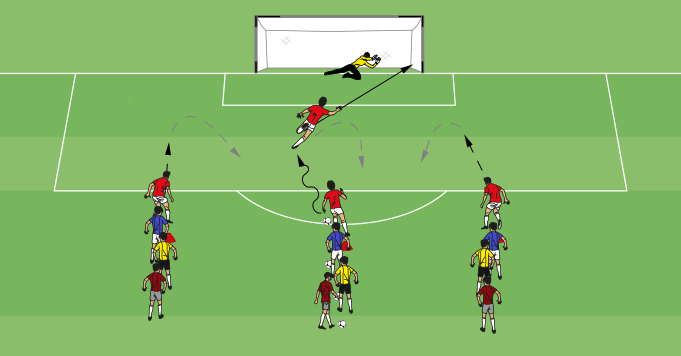 3v3 in waves is a fast paced offensive game that is a great for players to work on transitioning quickly and finishing.

Set up three cones 25-30 yards away from a large goal to function as lines for the attackers. Have players get into groups of three and line up at the cones so that there is one group member in each line. Give teams different color pinnies. Soccer balls start with the first group in line.

Transitions happen really quickly in this game so it’s important that players are focused and ready to go. Coaching emphasis in this game can vary. For instance some coaches may want players to take defenders on 1v1 where as others may want players to use their teammates and pass and move to find space and create an opening for a shot. This game also works well with 1v1, 2v2, or 4v4.

If you like 3v3 in waves, check out the 1v1 version of this game:

Similarly, check out these fast paced finishing and 1v1 drills: