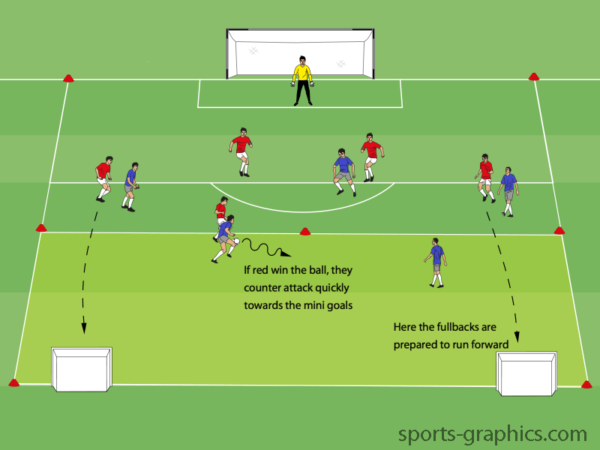 Counter attack with fullbacks is a fun game for players to practice going forward quickly as soon as their team wins the ball. This game works especially well when fullbacks get involved in the attack by making forward runs.

Create a field with a large goal on one end and two mini goals on the opposite end. Divide the field in half and create two even teams. Team sizes may range from three to seven, however, I typically use 5v5 for this drill.

The counter attacking team should start the play dropped back in a deep position to defend with a compact shape. This helps invite the opposition forward and open up space in behind. At the moment they win the ball, they should send players forward with speed. Quick transitions are key to successful counter attacks.

Often times, the best players to send forward in this drill are the outside backs. Because the mini goals are placed out wide, these players are in great positions to make forward runs and score.