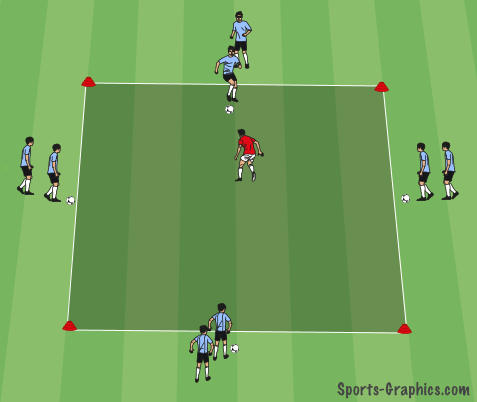 Defender in the middle is a competitive 1v1 variation where the defender must win the ball in order to get out of the middle.

Set up a 10×10 yard square grid and have players form lines on each of the four sides of the grid as shown in the diagram. Assign one player to start in the middle of the grid as a defender. The players in the lines around the square need soccer balls.

This drill works best with nine players or less so that none of the lines have more than two players. I always try to avoid long lines during drills so that players can maximize the amount of time that they are active during practice. If you would like to use this drill for more than nine players, it may be best to set up a second grid.

New dribblers enter the square in a clockwise rotation. Once one dribbler gets to the other side or loses their ball, the next dribbler in rotation can start.

One important consideration is that dribbles must make it to the opposite side under control with their soccer ball in order to be considered safe. This drill provides an excellent opportunity for players to experiment with different 1v1 moves to try to get past the defender. In addition, defenders are motivated to win the ball so that they can get out of the middle which creates a challenging environment for all players.

One drill that is very similar to defender in the middle that ends with players shooting on goal is defender in the square. In addition, be sure to check out some of my other favorite 1v1 drills: