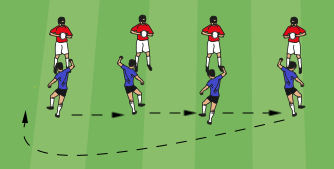 Down the ladder is a solid drill for players to work on ball skills such as headers, volleys, chest traps, and passing.

Have players partner up and line up across from each other forming two lines as shown in the diagram below. The players on one side need soccer balls.

For drills similar to this one, take a look at these that are great for practicing technical skills: