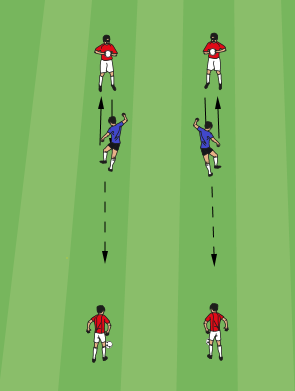 In running back & forth, players perform passes, headers, or volleys with two teammates.

Set up cones as shown below. Have players get into groups of three. Each group needs two soccer balls. The two players with soccer balls line up at the cones. The other player lines up between them.

Players can compete to see who can get the most successful passes/headers/volleys in one minute. A coach can also use this as a conditioning drill by spreading the cones further apart.

If you like this drill take a look these similar drills that are great for practicing technical skills: