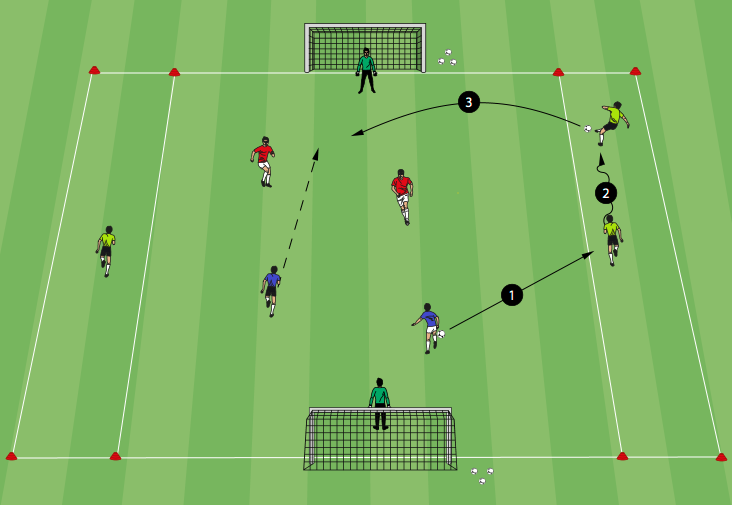 2v2 with wingers is an excellent small sided game to help players work on breaking down a defense, crossing, and finishing.

Set up a field with a large goal on either end. Create zones on each side that are approximately five yards wide for neutral players. Create two teams of two and assign a neutral player to play in each of the wide areas. Each team also needs a goal keeper.

One side starts with the ball and plays 2v2 to goal. The defensive team cannot defend in the neutral areas out wide. In light of this, it is recommended that the offensive team plays passes to these areas. With this in mind, all of the other traditional soccer rules apply. In the event that a ball goes out of bounds over a sideline, neutral players can resume play.

When a neutral player receives a ball out wide, attacking players should make runs to get in position for a cross. Because neutral players are not defended, this game is useful for working on crossing and finishing.

Another variation of this game may include allowing defenders to defend in the neutral areas out wide. In this scenario the game basically becomes 2v2 with two neutrals. The team on offense always has a 4v2 advantage.

Another drill with neutrals outside includes the mini goal game with neutrals. In addition, 3v2 with the last player to touch the ball coming off is another great small sided game to work on offensive skills.