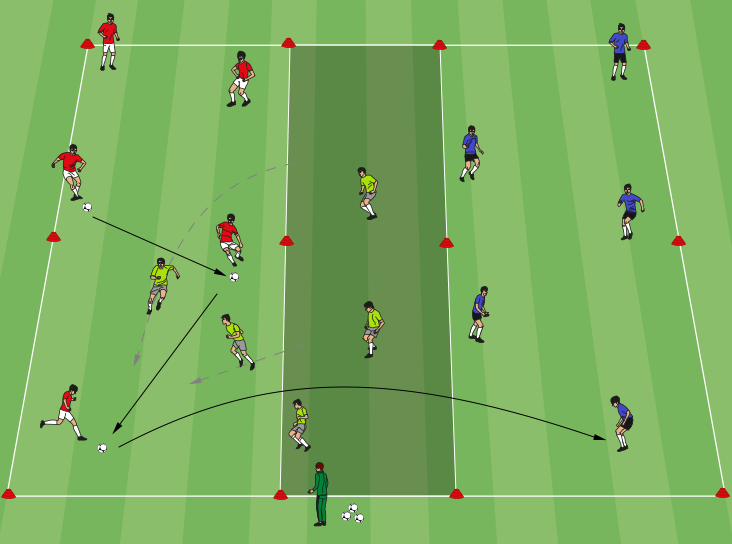 The three grid possession drill is a great game to get players sharp on the ball, linking up with teammates, and delivering quality passes.

Set up a playing field with three zones as shown in the diagram. I usually make the outside zones 20×10 yards depending on the number of players and the middle zone 20×5. Coaches can start with larger zones to help players on offense experience success. Create three even teams. Teams can range anywhere from four players to eight players with five or six being great numbers. Each team begins the game in one of the three zones.

The coach puts the ball into play on one side and the middle team sends two defenders to apply pressure. The outer team with the ball can earn a point if they connect six passes and successfully play a long ball to the opposite side. Since players in the middle are on defense, arial passes usually work best to get the ball to the other side.

Coaches should have a supply of at least 5-10 soccer balls for this game. That way when one side loses the ball, the coach can quickly restart play on the other side. This encourages quick transitions. Often times teams will try to get three or four passes in before defenders even arrive.

For a drill that is similar to the three grid possession drill, check out the rondo pressure drill. In addition, find the final pass and possession with neutrals in the corners are great drills to help players practice keeping possession of the ball.