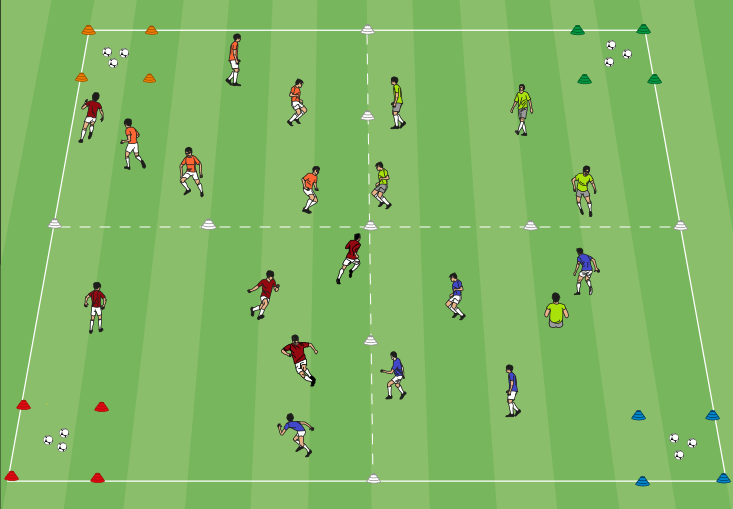 Treasure hunters is a fun invasion game where players are put into four teams and each team tries to steal soccer balls from the opposing teams.

Set up a rectangular grid that is separated into four quadrants and has a square in each corner with three soccer balls. Divide players into four teams with each team defending a quadrant.

Players are safe in their own quadrant or when in a corner with the soccer balls. The object of the game is for players to steal soccer balls out of the opposing teams corners and bring them to their own corner. If players tag opposing players in their quadrant, the opposing player must sit down and they can only be rescued by a teammate coming and touching them. At any point, the coach can stop the game and have players do exercises such as burpees or push ups. When this happens, the team with the most soccer balls in their corner is exempt from the exercises. The coach can decide whether to play this game with hands or by dribbling the soccer balls to transport them.

Players need to strategize and figure out if they want to play more defensively or go after the other teams soccer balls. An alternate variation of this game is for players to get rid of soccer balls rather than collecting them. In this version when the coach stops the game, the team with the least soccer balls in their corner is exempt from the exercises.

If you like treasure hunters and would like to see a similar game, be sure to check out capture the cone. In addition, you may enjoy tag games such as pinnie tag and rapid tag.