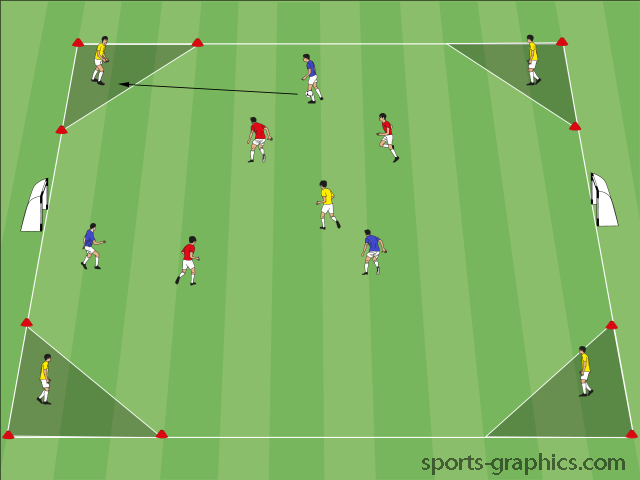 Separate the remaining players into two even teams. Team sizes may vary, however I prefer teams of three to six players for this game. Each team defends one of the mini goals.

One team starts with the ball and plays keep away from the opposing team in the middle. The team in possession can pass to neutrals in the corners and the neutral player in the middle. Teams must complete six consecutive passes before attempting to score in this game.

In addition, once a team completes six passes, the neutral players in the corners become ‘unlocked’ and are no longer restricted to their corners. This gives the neutrals more freedom to help the offensive team in the middle score a goal.

Alternate Variation: Instead of all four neutral players being unlocked at the same time, teams can unlock one neutral player at a time by passing them the ball once they’ve completed six passes.

If you like unlock the neutrals, be sure to take a look at these similar possession drills:

4 thoughts on “Unlock The Neutrals”