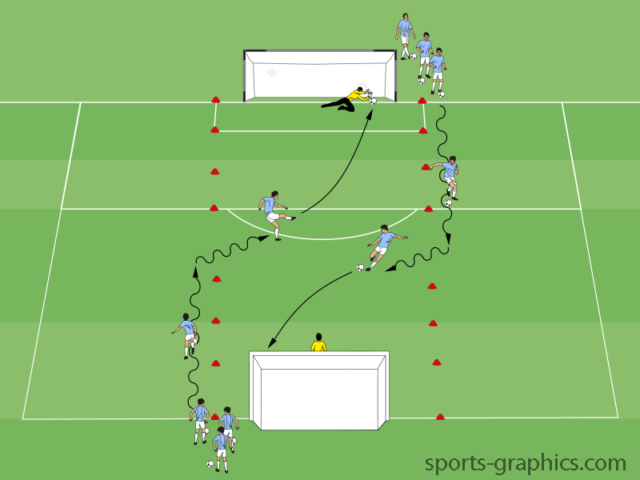 This two goal finishing drill is a great way for players to practice shooting from middle to long range. It is simple to set up and easy to implement for large groups of players. In addition, there are tons of awesome finishing drill variations that can be performed with this set up.

Set up two goals 35-40 yards across from one another. Place a line of cones on either side of each goal as pictured above. Have players form even lines at a post of each goal diagonally across from each other. All players need soccer balls for this drill.

The first player from each line dribbles down towards their opposite goal, cuts inside, and takes a shot. After shooting, the players switch lines. I usually tell players in line that they can start dribbling as soon as the player in front of them makes it to the fourth cone. This ensures that players get the maximum possible number of repetitions shooting while performing this drill.

Every so often have players start on the opposite sides of the goals so that they can practice shooting with both feet.

Alternate Variations: One great thing about the set up of this drill is that there are tons of different variations coaches can use with this layout. For instance, instead of having players cut in and shoot on the goal across from them, they can turn around the last cone on their side and shoot towards the goal where they came from.

In addition, coaches can experiment by having players perform different moves around the cones or slalom dribbling.

Another variation can be performed by having players run down one side and receive a diagonal pass from the opposite side. This is similar to the rapid one touch finishing drill and requires players to control the ball quickly before getting their shot off. I encourage players to shoot with one touch if they can, however, often times a control touch is needed in order for players to produce quality shots.

Whenever players are practicing finishing, it is best to try to replicate a game like environment as much as possible. This ensures that the skills players develop in practice will improve match performance. With this in mind, I always emphasize that players practice at match speed. This means dribbling as quickly as possible, making explosive runs, and delivering crisp passes. In addition, when passing players should communicate by calling their teammates names just as they would in a game.

If you like these two goal finishing ideas, be sure to check out some of my other favorite finishing drills: