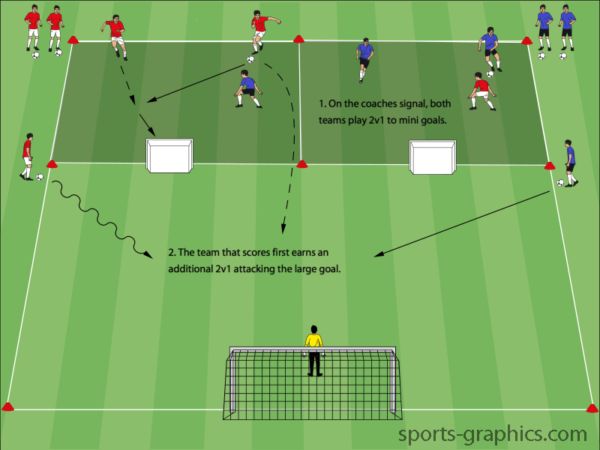 2v1 race to finish is an excellent drill for players to work on speed of play and going forward quickly when they have a numerical advantage.

Create a large grid with a two smaller grids on one side and a full sized goal on the other side. Place mini goals at the ends of each of the two smaller grids as shown in the diagram. Divide players into two even teams. Each team starts at the top of a small grid and sends one player to defend in the opposite small grid. In addition, the teams also assign one player to start at the bottom corner of the small grid with a soccer ball.

On the coaches signal, the first two players from each team starting at the top of the small grids take on the opposing defenders in 2v1 situations. The first team to score on their mini goal is rewarded with an opportunity to attack the large goal.

This drill works best when players don’t get too close to the large goal when finishing in the second part of this drill. When players get close, it is too easy to beat the keeper. With this in mind, I usually prefer to have about 25-30 yards of space between the end of the small grids and the large goal. Often times I will also require players to shoot from at least 12-15 yards out. Coaches can use cones to create a line that players must shoot from behind.

Furthermore, players have to attack quickly to succeed in this drill. The two teams are racing in the beginning to see which can score first and earn an attempt on the large goal.

Have players switch lines after every round so that it’s not the same players defending and starting at the bottom of the grid every time.

If you like 2v1 race to finish, be sure to check out rondo to finish which utilizes a similar set up. In addition, here some of my other favorite finishing drills: