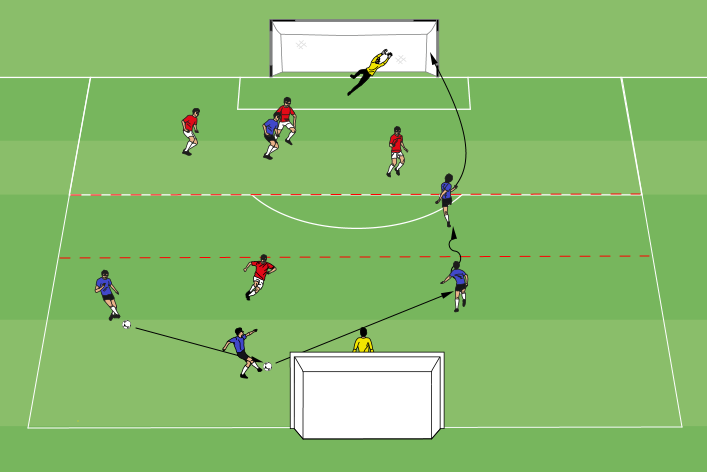 The Bayern vs Barcelona shooting game is a great finishing drill for players to work on long range shooting and connecting passes with teammates.

Set up a grid as shown with two full size goals on either end. Sort players into two teams of four. Create three zones with a 3v1 on either end and a neutral zone in the middle.

The ball starts with a team of three on one end. Once the team of three connects four passes they can send a player into the neutral zone to shoot. Defenders are not allowed to defend in the neutral zone so the shooters get uncontested shots from about 20-25 yards out. Once one team shoots or loses the ball, a new ball starts on the opposite side. In the event that the defender wins the ball from the three attackers, they can shoot on goal. Play games to five goals and rotate defenders every few minutes.

Make sure that the offensive team moves so that players find space and get open when it is 3v1. As soon as four passes are complete, players should be eager to go towards the goal and get a shot off.

If you like the Bayern vs Barcelona shooting game, check out these finishing drills:

For similar drills that emphasize possession and finishing, take a look at these: