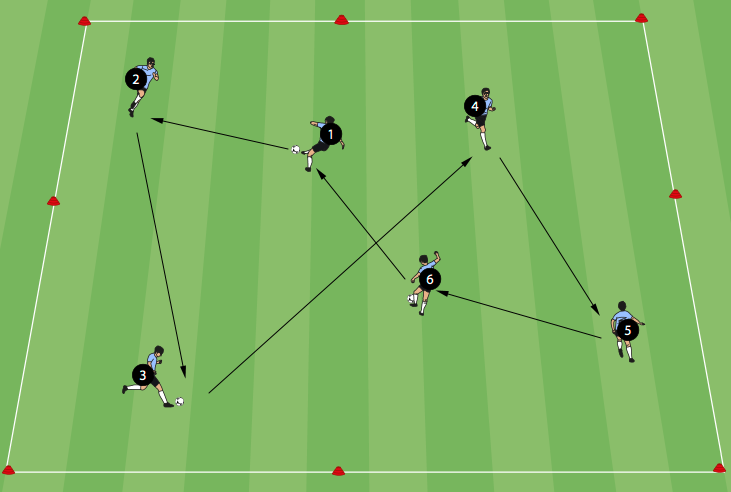 The numbered passing warm-up drill is ideal for players to work on finding their teammates and passing the soccer ball around the field.

Set up a rectangular grid and put players into teams of six. Number the players on each team from one to six. Multiple teams may play in the same grid. The size of the grid may vary based on the number of players. A coach may also set up multiple grids and have only one team in each grid if they prefer. For a team of six a 20×30 yard be an ideal size.

Players one passes to player two, player two passes to player three, and so on. The last player passes back to the first player and the cycle continues. To incorporate dynamic locomotions, after a player passes the ball they run around a perimeter cone doing different warm-up locomotions before coming back into the grid. If there are multiple teams in one grid, the players only pass to members of their own team.

Make sure players are communicating by calling for the ball and calling out names before passing. Players should constantly be moving throughout the grid and not be standing in one place. Players need to be aware of their surroundings to avoid collisions. To increase the speed of play, the drill can be progressed to one or two touch. This forces players to know where the next player in the sequence is before they even receive the ball, increasing on field awareness.