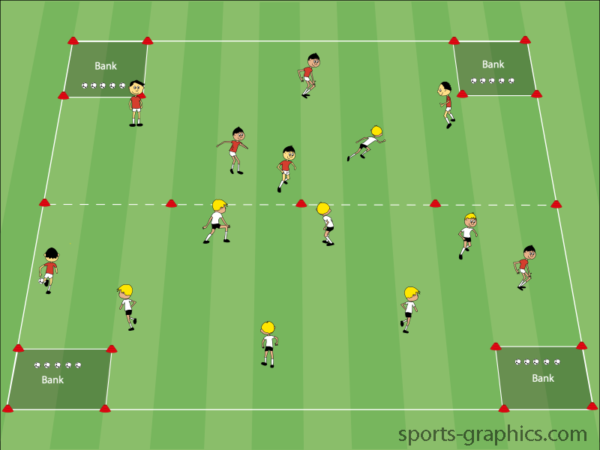 Bank robbers is a fun invasion style game for youth soccer players to work on dribbling, quickness, and agility.

Set up a large grid with a ‘bank’ in each corner. Divide the grid halfway down the middle and create two even teams. Each team is responsible for defending the two banks on their own half. Be sure that when the game starts, the banks on each side contain the same number of soccer balls.

When the game begins, the two teams attempt to steal soccer balls from the opposing team’s two banks and dribble them back to their own.

Player’s are considered ‘safe’ on their own half of the grid. However, when a player enters the other side, the opposition can tag them. In the event that a player gets tagged they must sit down and can only be rescued if a teammate comes and high fives them. When successfully rescued, both players get a free pass to walk back to their own side safely.

In addition, players are also safe while inside the opposing team’s bank. For example, if a player runs to the other side and into one of the corner banks, the defending team must wait for the player to leave the bank in order to tag them.

Play the game for a specified amount of time and whichever team has the most soccer balls in their two banks at the end of the game wins.

Each team should develop a strategy and use teamwork in order to be successful. There are many different ways to play this game. For instance, some teams may prefer to sit back and defend, inviting the opposition in so that they can tag them. Other teams may prefer to send lots of players into the opposing territory to aggressively try and steal the soccer balls.

Some other similar invasion style games to bank robbers include treasure hunters and capture the cone.