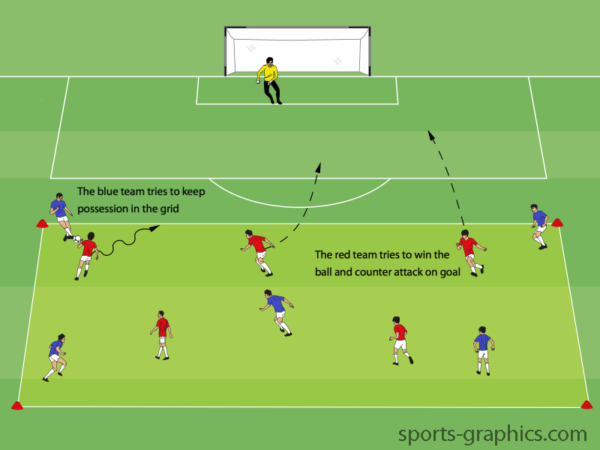 The Barcelona vs Atletico Madrid drill is a simple way to incorporate two contrasting styles of play in one training session. The team emulating Barcelona strives to keep possession of the ball where as the team representing Atletico Madrid must counter attack quickly to be successful.

One of the great things about this drill is that it is extremely easy to set up. Simply create a large rectangular grid 20-30 yards away from a large goal and divide players into two even teams. You’ll also need a goal keeper to defend the large goal.

Both teams start in the large rectangular grid. One team starts with the ball and earns a point for every six consecutive passes they can complete. This team is representing Barcelona because Barcelona is typically an excellent passing team who can dominate possession of the ball.

The opposite team who is representing Atletico Madrid attempts to win the ball and counter quickly to score on the large goal. For every goal this team scores, they are awarded a point.

When the Barcelona team loses the ball, they can only send two players outside of the large grid to defend. This encourages them to win the ball back close to where they lost it and prevent the opposing team from going forward.

The point system in this game can be adjusted to create a competitive match between the two teams. For instance, if players move the ball really well, it may be a good idea to require more than six passes in a row for the Barcelona team to earn a point. In addition, it may work better to award two points for every goal the Atletico Madrid team scores.

Often times I will use this drill with my starting offensive midfielders and forwards representing Atletico Madrid so that they can practice pressing the ball and attacking quickly when they win it. To encourage speed of play, sometimes I will add a rule that the counter attacking team must score within six seconds of winning the ball for the goal to count.

Here are some more drills to help your team possess the ball like Barcelona:

And here are some drills to help your team counter attack like Atletico Madrid: